Reclaiming Dignity  - The crown on the sheep in the Sheep Incognito painting series generally is a reference to people in power, bosses, presidents, and the media - people of authority, so to speak.

Reclaiming dignity was painted when it became clear that our policies here and there were causing us as americans to lose just a bit of the glamour we had been polished with for so many years - it started exposing the raw-ness underneath, and the true "shape of the sheep", so to speak.

Perhaps someday we will be able to re-attach what was lost, and again be a people that is warm, woolly, and funny.

- prints on paper in double mats, and on canvas, gallery wrapped or framed


Your Review: Note: HTML is not translated! 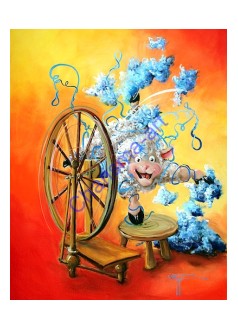 Spinning Out Of Control PRINT
$24.95
Add to Cart